I’ve begun the Great Pattern Revamp of 2007 in an attempt to make some of my old patterns not look like they were written by a new knitter, which of course they were. #1 on the list was the Felted Knitting Tote, prompted by some questions that were emailed to me this morning, embarrassing me thoroughly.

Aw, the memories. I only wish I still had the bag so I could take a decent photo!

And oh, how I wish it wasn’t too late to change the name of that pattern. I used the word “felted” incorrectly on purpose, because it was, by then, the term that was popular in certain circles to describe fulling. I wanted the pattern to show up on internet searches, and boy, does it ever. I still regret it.

Knitting has had to stop on the Fantom Bohus because I need to spin more yarn. It’s making me anxious, despite the pleasure of spinning that gorgeous wool/alpaca blend, so planning of the next project has begun.

Mark (Mr. HelloYarn) went with me to the Circles moving sale last weekend and helped me empty the store. It turns out he’s as helpless in the face of sale Rowan as I am. He silently pointed at the shelf of Rowan Scottish Tweed Aran in Thatch (color 018) and 10 skeins were purchased. He was also very fond of these buffalo nickel buttons. 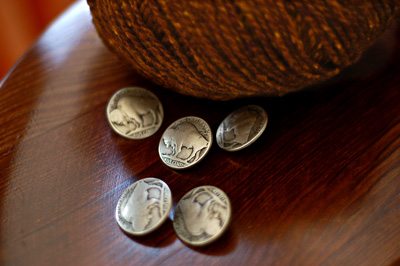 So, a new project is in the works- the Saddle Shoulder Aran Cardigan by Elizabeth Zimmermann/Meg Swansen from Wool Gathering #63. Yoohoo over there made one a little while ago and when shown about 975 sweater photos yesterday, Mark chose this one. He has good taste. 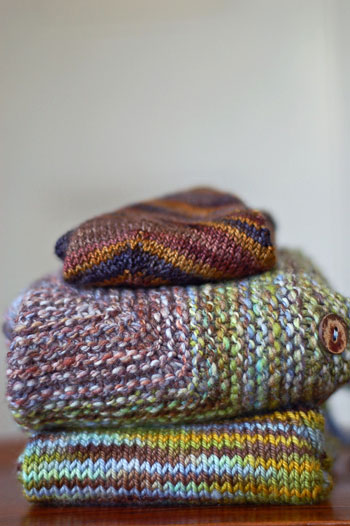 All washed and dried and smelling delicious, off to baby.

15 Responses to “Rewrite and New Project”