Posts from the &#8216Crochet’ category 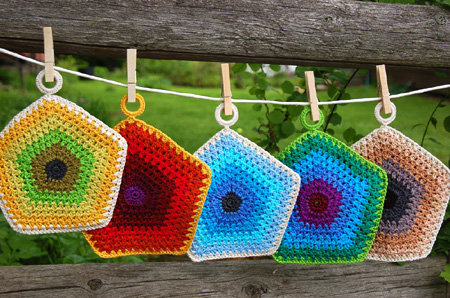 Woot! I’m done! Between practicing my crochet and trying to settle on a pattern for the swap, I must have made 10 potholders, so when it came time to do my 5, I was kind of sick of them. Great behavior for one of the hosts, right?

It turns out this pattern is super fun and I started a 6th last night, just because there was one more color combination that I needed to do.

Verdict: AWESOME! This is a totally simple pattern that lends itself to stripes and fun color combinations.

These potholders have 2 identical sides and are crocheted together on the last round.

White plastic drapery rings are used for the loops. When I got to the end of the joining/ last round, I did single crochet around the plastic rings and slip stitched through the first stitch.

These are heavy duty potholders. There’s no chance a finger could poke through and be burned.

These were very wonky until they had a visit from a steam iron. Don’t freak out if you make them and they won’t stay flat. Give them a good smushing with an iron.

Toddy coffee: I’ve been making mine in a 1/2 gallon jar, straining through first a regular mesh strainer to get out the big bits, then through a fine tea strainer back into the original, now washed, jar. We drinking it iced, 1:1 with vanilla soy milk. I can’t believe it took me so long to try this. It’s excellent!

Mimobot mimoShroom: My new project is going to be to put all of my recipes into this little flash drive, rather than printing out recipes from the internet. Since getting a Dell Mini 9, it’s been super easy to cook from a recipe on the screen.

MASW: I’ll be at the Massachusetts Sheep and Woolcraft Fair both days this weekend, shopping, visiting, and helping out AmyBoogie/Spunky Eclectic at her booth. I won’t be selling there, just visiting. Say hi!

Hi!! Life has been so busy lately that I meant to make a blog post last week and am only getting to it today. Now, that’s bad. I’m constantly pecking away at dyeing the fiber club, but I have a new plan and it’s to dye a certain amount of wool for the shop every week and put it in the shop for sneak attack updates. I did one last week and saw some new names on the orders, which was fun. I think this new arrangement is going to be pleasant for both me and people looking for my fiber.

The fiber club renewals are up for sale right now and will be available until the 27th. I’m not sure if there will be any slots available to new members this time around. I am running at capacity in the current club. I’ll definitely post here if/when I add new slots.

Life is about to get even busier. I’m preparing for Yarn School, which is May 7-10 this spring. There are a few slots left, if anyone wants to join us. Flights are so cheap! Nikol’s sheep had babies recently, so I’m looking forward to snuzzling some lambs in addition to hanging out with a bunch of awesome fibery people.

I’ve been all over the place as far as making stuff goes. Crochet took over for awhile: It’s going to take over again because, despite being one of the hosts of the potholder swap, I haven’t made any potholders. :o I spent a lot of time practicing stitches and reading charts, especially in Japanese books. The book on the right is phenomenal. It’s Crochet Patterns Book Motifs Edgings 300 (ISBN9784529042338) and it’s all charts and very easy to understand, despite being a Japanese book.

TtV Photos: I only took my first Through the Viewfinder photos last night, but I can tell it’s my new favorite. I’ve got a Kodak Duaflex II and an Argus Seventy-Five that I’ll use with my Nikon D50 with 50mm f1.8 lens with 2x closeup filter. I’ve built the connecting contraption (shoddily) for the Kodak and have taken a few photos, including the one of seedlings below. The deal is, for anyone who isn’t familiar, you set it up so that your digital camera takes photos through the viewfinder of an old reflex camera. Super fun!

Gardening: We’ve been doing a lot more outdoor stuff now that the snow is gone. Raised beds have been built for vegetable gardens and seedlings are growing in the house. We always had a little kitchen garden in the city and had success with strawberries and herbs, but the sun was never quite bright enough for a bounty of anything. The new yard is a different story. Between the raspberry and blueberry bushes that were already in the yard and our two big raised beds, there should be a lot of canning and freezing in my future. I can’t wait!

The Commons on Flickr: Many institutions are publishing old photos on Flickr. The Library of Congress has enormous sets of beautiful images to peruse. Check out the 1930’s-1940’s in Color.

The No. 1 Ladies’ Detective Agency: I haven’t read the books, but I certainly love the television show! It’s charming, funny, takes place in a super interesting place, and the characters and actors are wonderful. I find myself checking the DVR for it days before a new episode airs, like it will appear just because I want it to.

Hi, folks! Thanks to all of you who have joined the potholder swap! We are so excited about this and happy to have you all participate in this swap. There is still some time left for those of you who are interested but have not joined yet. The deadline for signing up is midnight tonight. We’ve sent out some invites to the blog that weren’t used, so if you signed up but don’t see your name on the sidebar, please do not hesitate to email us with a link to use for you. Drop us a line at potholderswap2009@gmail.com so we can update the swapper list with your name and link. We won’t be able to add you to the blog as authors, because we’ve exceeded Blogger’s limit, but we can add you to the swap and put you in the sidebar as a swapper.Regarding fiber, we are specifying wool or cotton only please. The reason being that cotton ignites at about 410º Fahrenheit, and wool ignites at an even higher temperature and has excellent insulating properties, which is a quality one would want in a functional potholder. Cotton potholders and hot pads can be thrown in the wash where as wool might require a little bit more special attention. For more particulars regarding the pros and cons of what fibers to use for potholders, please see this discussion here. For this swap, however, we need you to use wool or cotton only please. We need to do some testing as far as superwash wool goes. We suspect it might be unsafe for potholders, but we’ll let everyone know in the next blog post.

We’ll be sharing all further info regarding the swap on the swap blog. Look for posts there soon.