I’ve been needing to knit something from Selbuvotter: Biography of a Knitting Tradition, Terri Shea’s fantastic book about these traditional Norwegian stranded mittens, since the day it came in the post months and months ago. It is filled with so many beautiful patterns. One pair, called NHM #10, are especially gorgeous and dainty. They are copied from a pair of mittens housed at the Nordic Heritage Museum in Seattle, WA that feature a lovely scroll on the back, as well as the date (1932) and someone’s initials. Resistance of knitted lettering is futile. 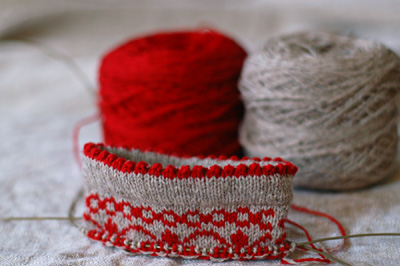 Here’s my start. The yarn is Harrisville New England Shetland, bought on cones at Webs, where they have giant racks of these seductive cones, in Red and Oatmeal. The pattern calls for a gauge of 9.5 sts. per inch, and the book sample was knit at 13 sts. per inch, but I’m going for 8.5 so that there’s some room for a lining.

The pattern has a short ribbed edging, but these mittens are so pretty, I felt they deserved a picot hemmed edge, non-traditional as that may be. I used to use a provisional cast-on for hems, but have been using the backwards loop cast on lately and it’s really nice and stretchy and works very well, all while being less fiddly than a provisional cast on. For this hem, I cast on, knit 9 rounds in oatmeal, one in red, did the *yo, k2tog* picot round in red, knit the next round in red, then 9 more rounds in oatmeal. Then, to knit the hem up, folded it so the cast on edge met the stitches on the needle, lining up the first cast on stitch with it’s corresponding first stitch of the round on the needle. I snagged the first cast on edge loop with the right needle, placed it on the left needle, and knit it together with the first stitch of the round. I then knit the second cast on stitch with the second stitch on the needle. Works great.

Here’s another way to do a picot edge.

This one’s especially happy-making with its red teeth, don’t you think? The inside of the hem is super neat and tidy, which is certainly pleasing, as well! 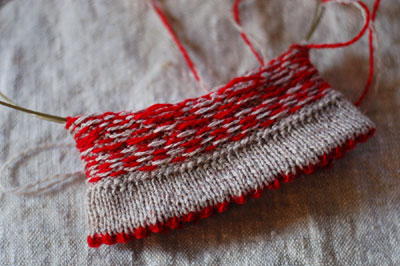 I got my book straight from Terri Shea’s Selbuvotter website and it came signed and numbered, which is so nice. Be sure to check the site for errata if you get this book, which I highly recommend!