The Great Two Person Knit-Along Part 2 has begun. Don’t even bring up what happened the last time. Jared has been kind enough not to! :P (I’m such a Tomten failure.)

This time around, Mr. Knitting and I are making Na Craga, from Alice Starmore’s Aran Knitting. That’s what that brown mystery swatch was for. It’s the most specific swatch I’ve ever knit. Cast on number was specified, as were number of pattern repeats. I got gauge in the first go. Imagine!

Neither of us can help making some changes. I won’t speak for him, but he’d better make a post soon or he’ll be the failure of this knit-along! Mine’s going to be a buttoned cardigan with a high collar. It’s going to be a much closer fit than the original (modeled in the book by a man I imagine is the hotttest pig farmer in the world), as well, with slimmer arms. I started knitting the first arm and was mortified to see what seemed like an 80’s batwing shape emerging. One rip and increasing at half the pace of the pattern solved things nicely. Behold, sleeves:

The fabric in an Aran weight yarn is stiff, hard, scratchy++++. I keep joking that I can just wear the sleeves and train attack dogs. The sweater will never wear out. I’m using the yarn I bought on our last trip to Ireland. Fitting, no? It’s what I’d call “normal rough” yarn, but the gauge of this sweater brings out a roughness not felt in the skein. Na Craga is definitely going to be more of a jacket than a sweater. The skeins of this yarn are huge, more than 8 oz. each. I was knitting with some friends recently and the size of the ball kept cracking them up. I’ve been trying to capture the humorous/humongous size ever since, but it really photographs small. Attempt #1. This photo is pretty, anyway: 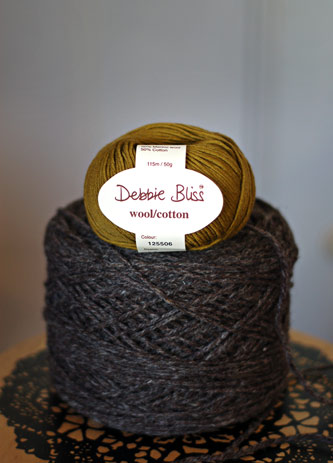 Buttons were purchased at SPA. I am ready ready ready to knit this project, however, this might be the last anyone sees of it for awhile, as I’m doing some supercool design work and after that, there’s Yarn School, and after that, hopefully fruitful house hunting.

Oh! There’s a new yarn that’s captured my heart. You wouldn’t have been able to resist it either, would you? It’s from Webs. My friends and I might have cleaned them out of this color (#4). 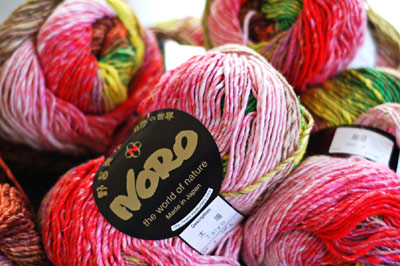 The fiber content is 40% cotton, 30% silk, and 15% each wool and nylon. It’s a cottony, papery version of Kureyon, except the skeins are 100g! I used to moan about the discontinuation of Cotton Kureyon to anyone who’d listen. No more! I’ve found my new best friend. With this, I think I need to knit a boatneck summer sweater, maybe with 3/4 sleeves. The yarn is lovely enough to just go for the horizontal stripes, despite being of fluffy build, but I might experiment with a neck steek and knit it side to side.

I’m off to dye mitten kit yarn. That’s really all you wanted to hear, right?