Thanks so much, everyone, for your patience during the server move. No one even yelled at me, which was so nice! Everything’s working perfectly now and faster, to boot. I’m sure there were plenty of people swearing at me under their breath on Tuesday, but they kept it to themselves, and I’m thankful.

This is the last weekend for Fiber Club renewals. On Monday, I’ll open the club up to everyone.

Onto knitting, which seems to hate me lately. I’ve ripped and re-knit the Fantom Bohus sweater’s yoke twice, the last time due to a big math error (so lame- calculator, Adrian!), but I love it to bits now. 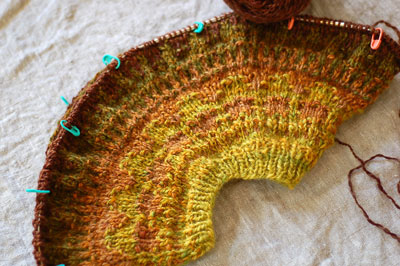 Click for big popup, so you can see it all well.

I had to change the order of the colors around a bit this time, because I changed the pattern to be more subtle and the transitions turned out to be too hard to see in the original order. I’d wanted the colors to go from lightest to darkest down through the yoke, so it looked like it was fading as it went up, but the way it is now is a good compromise. The vertical stripes add so much to the design, I think, so I’m really glad I ripped and re-knit. 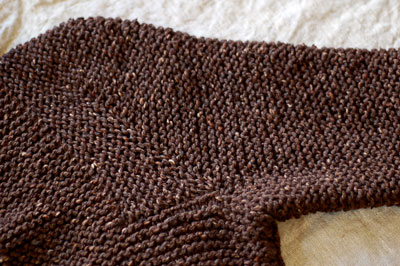 This sweater really hates me. This is short row shoulder #2, and it’s still a little off. Jared helped me out immensely with this shoulder, and the idea is spot on, but the fit isn’t great on me. I will forge ahead with this. Do not fear. More math will be done. Since I’m using chunky yarn, at least the miles of garter aren’t that much of a chore.

Have you seen Jared’s Tomten? Go look. It’s glorious. This will all still be here when you get back.

In super exciting news, another friend of mine is pregnant. More baby knitting!!

15 Responses to “Knitting Update Plus”