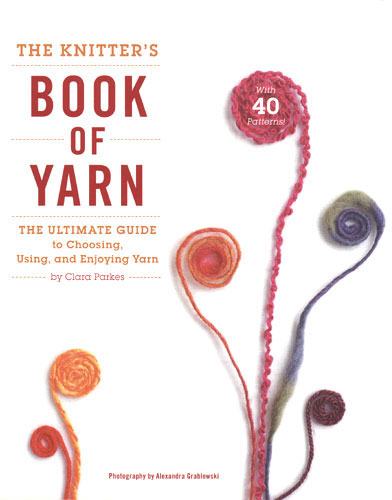 On Thursday, I got a great treat in the mail. It was The Knitter’s Book of Yarn by Clara Parkes, and marks the first release of a book that I wrote patterns for. There may have been childlike squealing. It was so difficult not to show these mittens as I was knitting them, because I was pretty darn excited. Thankfully, they’re free to be shown now. 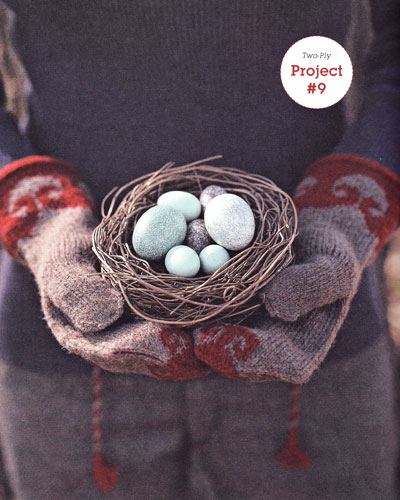 Double-Thick Mittens, knit in Alice Starmore Hebridean 2 Ply. The whole mitten is stranded, even the solid sections. You betcha they’re warm. They’ve got a picot hem, Latvian-style braid, and twisted, tassled strings to tie them together when not worn. The yarn is a woolen-spun heather, which contrasts the graphic design nicely, I think. 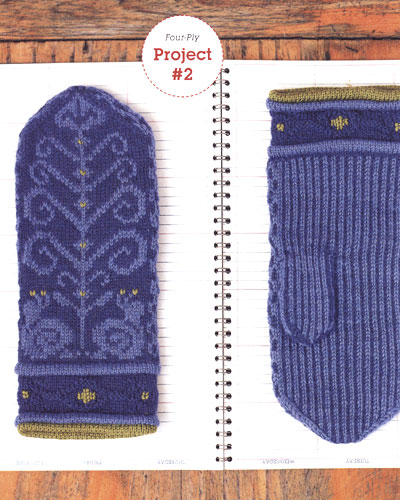 Norwegian Snail Mittens, knit in super soft Dalegarn Baby Ull. I can’t praise Clara enough for allowing me to make such an amusing mitten for her book. These have circus-tent striped palms, fanciful motifs, floops galore, duplicate-stitched kiwi green accents, knit/purl patterning, and SNAILS. This yarn is a smooth worsted-spun solid that shows the pattern to great effect.

Mittens aside, this is such a wonderful book and I’m so proud to be involved. If you’d like to learn about fibers, yarn construction, properties, and selection for projects, this book is for you. The patterns aren’t half bad, either. ;) Right Amy? Amy has 8 patterns in the book!

Rhinebeck was a total madhouse, mainly because I went with Jess and Casey from Ravelry and a bit of a hubbub follows them whenever they go near yarn-type people, but also because 12,000 people were there on Saturday alone. Being around Amy Boogie might have had something to do with the craziness, as well. Amy is like a force of nature, complete with a desire to party and a checkbook, all wrapped up in wool. She’s my kind of woman. I had a great time seeing old friends and meeting what seemed like 9,000 of the 12,000 people who showed up. The Ravelry party on Saturday was a ton of fun: I (well, the Fantom Bohus sweater) was felt up by many a knitter, and neither of us minded, the company was fantastic, and we closed that place down.

I took literally one (bad) photo, but other people were much more prolific. Want to see some Rhinebeck photos?

Ravelry events, including the festival
Rhinebeck 2007

I’ve got lots of knitting to show. Cobblestone is done, and I knit a pair of legwarmers (!) in the van over the weekend. I knitting like a maniac on the Jackyll and Hide from the Fall 2007 Knitty. The plan is to frighten the life out of every trick-or-treater we get.

Yikes! I have an FO to show, but no time to take photos and post. It looks like it might be quite warm at New York Sheep and Wool this year, so the rush to show you what sweater I’ll be wearing so that I’m recognized for Blogger Bingo and just plain saying “Hi” probably isn’t terribly important. Anyhoo, if the weather is cool, I’ll be wearing that Fantom Bohus or my Cobblestone, which is finished and really, really lovely! If it’s too warm, you can look for my giant bag. There’s a blogger/Ravelry/blog-reader meetup at noon each day outside that big food building (building E). Come visit! I’ll be there both days. See ya!

The fiber club subscriptions for November-January are sold out. Thank you!

There have been some changes to the club this time around. I’ve lowered the amount of fiber to 2-5 oz. per month because I’ve got some fancier, and therefore more expensive, stuff for one of the months. There is also added a double dose option. Pay shipping once and get twice as much fiber!

The October selection is shipping today. It’s such a great spinner. I’ve been spinning up the leftover tails for the last couple of nights and have got two bobbins filled. It’s so fun to spin that I’m not stopping until there’s enough yarn for a sweater for me. This will also make fantastic winter wear like socks and mittens. Want to sneak a peek?

I’m going to do one last batch of the Mollusc Wensleydale for club members. Didn’t get enough? 4 oz. is $15 plus shipping. Shoot me an email if you’d like to get in on this batch. (Click the little envelope drawing on the left to contact me.)