Last week, I posted a photo of Mark on Flickr to show off Steven‘s lovely Clockwork Scarf, which visited us for a bit. Some people mentioned Mark’s natty jumper and hat, and I got to thinking about how old they are on how well they’ve held up. No doubt it’s due to the fact that they were made from wonderful yarns. 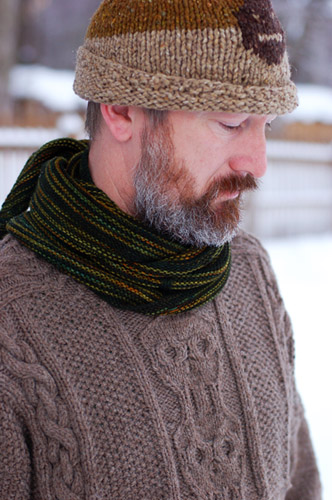 The gansey with skull cables was knit way back in January of 2006 using Cascade Ecological wool, which I was unsure about at the time. I’d gotten it in a trade and it didn’t feel so great in the skein, but seemed better when knit, and was FANTASTIC when washed. Mark wears this sweater an awful lot and we’ve never even had to de-pill it! The cables are plump and soft, the sweater is toasty warm. The whole thing is a success.

The sweater is still a favorite, no doubt because of all the lovely details. The chain cable is from Barbara Walker’s Fourth Treasury of Knitting patterns. Here’s a swatch. I remember it requiring 2 cable needles and perseverance, since I never did manage to memorize the pattern, which is not usually a problem! The skull cable is my own invention and available as a chart. The design of the sweater, itself, is my own, following methods described by Alice Starmore and Gladys Thompson in their fisherman sweater writings. 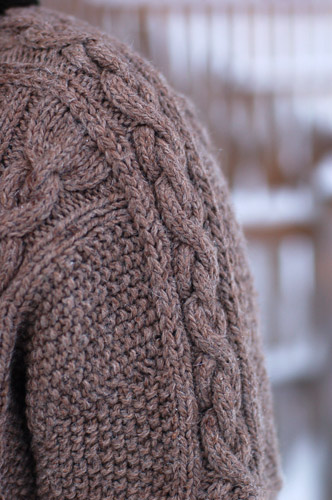 The hat was such an accident and turned out to be his favorite. My friend Michelle sent me some scraps of Rowan Yorkshire Tweed Chunky way back when and I knit them into this hat, inspired by a hat I’d seen in a photograph somewhere, in November 2005. It’s knit flat and seamed and it was supposed to be for me, but ended up being too big. Mark snatched it and has been wearing it faithfully ever since. It looks brand new! Unfortunately, the yarn was discontinued in 2006. Fortunately, I still have a bunch of it (ha!) and it can be found kicking around for sale on Ravelry. 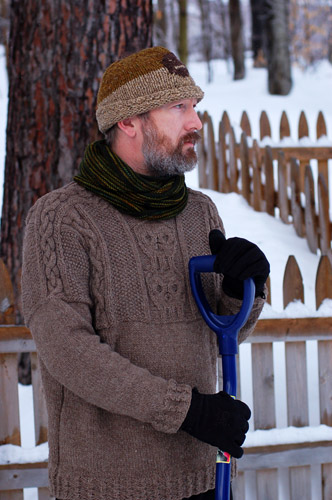 What Else is Awesome This Week:
* making your own lotion– This turned out so well! Just like making mayo. It looks a bit like mayo, too, but thankfully doesn’t smell like it.
* watching old movies – It is so so cold out (-21 last night!) and there’s so much snow down (feet of it) that we are staying in most of the time. Last night was Close Encounters night. I feel some Jaws coming on soon. I do so love a young Richard Dreyfuss.
* If Pippa could talk, I’m sure she’d love to tell you about her Pawz booties. They keep the ice and salt from irritating her paws, plus they’re really comfy. They’re also pretty cute. I mean, seriously!