The test-knit mittens are finished. 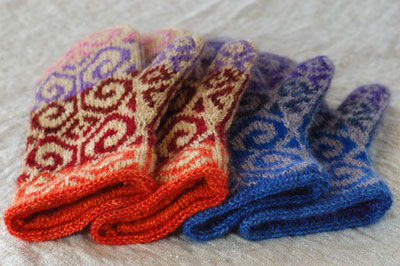 Aren’t they lovely? These were great fun for me, and the testers were happy, too. I let them choose their own colorways, so hopefully they’ll enjoy their mittens for a long time to come.

This pattern’s done. Supercute packaging is getting there. The yarn’s what’s left to do!

A kit to make these mittens will be available in the shop at the next update, on 2/12/08. From the reception these got over at Flickr today, I’m thinking I’d better spend the next two weeks doing not much more than dyeing yarn massive amounts of yarn. Would there be great objection to a mitten kit only update (with stuff from Sarah, too, of course)?

My plan is to dye different colorways for each shop update so that if you don’t see anything that grabs you on a given day, there might be something that sings to you on another.

Three sizes can be knit, with only the gauge changing. There will be enough yarn to knit any of the three sizes.

Yeah, I know. I want that, too. I need to find a suitable commercial substitute to test in and then we’ll see. Does anyone have experience with Dale of Norway Tuir? I want a very sturdy and readily available yarn for a sub. It seems that Tuir is discontinued. Testers and yarns have been found. Thanks, all!

This month’s fiber is ready to go. Shipping will begin tomorrow. I’m cutting it close to be calling it January’s fiber, huh? I’ll do better next month. Promise.

As long as there isn’t a big rush for renewals overnight, I should be putting up a goodly amount of fiber club slots for new members. They go up for sale at 10 am EST. (If you’re not a current member, do not buy before then or I’ll cancel the order. I’m sorry!) See you then! 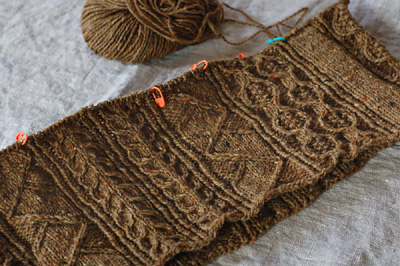 I’m awful. I know. Instead of putting the button band on that Tomten or finally photographing the long-done and much-worn Cobblestone, or even making the February sock-along stranded socks I was so excited about, like, last week, I started something big and new. One night a week or so ago, when I had just finished a pair of Fuzzy Feet* for myself and asked Mr. HelloYarn if he wanted some, he asked “When are you ever going to make me something big??” and acted all cold and pitiful and kind of whined about his unused buffalo nickel buttons, so here we are, 7 inches into the body of a vest for the poor, chilly man.** 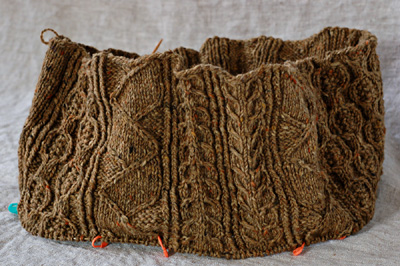 The buttons were originally purchased for the Saddle Shoulder Aran Cardigan, from Spun Out #49, but he changed his mind and wanted a vest. Looking at the Saddle Shoulder Aran Cardigan in a more fitted model than the one shown in the pattern, I thought that just by removing the sleeves (and with maybe just a tad more width removed at the armholes), a great vest would be made.

As you may know, this pattern/recipe gives you all the freedom you could ever want in terms of sizing and selecting cables and edge treatments, but also provides charts for the cables used in the sweaters shown. Elizabeth Zimmermann’s Sheepfold Cable (this looks like a folded ribbon) is included, as well as a Fishbone (I added a reversed Fishbone, as well), both of which I adore far too much to leave out. Poking through all my stitch dictionaries for a third cable, one leapt out at me- the Banjo Cable in one of Barbara Walker’s Treasuries. Mr HelloYarn’s singular passion is playing the banjo, so it was all too perfect for words. I took measurements from the vest he’s wearing in that photo and got to swatching.

The yarn is Classic Elite Skye Tweed, which I stashed wholeheartedly when Webs had the closeouts. This yarn seems like it wasn’t washed post-spinning and is quite oily and stiff. It does crazy things when washed, at least in hot water, which is how I treated my swatches. It blooms and plumps and softens into a very solid-feeling and spongy fabric. Some of the cable definition, which is so amazingly crisp when first knit, is lost, but the scrummy feel makes up for it.

Because we’ve got to use those buttons, the vest will open in the front, so this puppy will have a steeked opening. I practiced Meg Swansen’s crochet-secured steek on my swatches and determined that it is the best invention since yarn and needles, perhaps. It’s clean-looking, flexible, and much fun to execute. It’s so awesome that I’ll do the arm holes and neck, too. The steek is on the wide side (7 sts.) so that the folded-under part will create a nice facing when I add the button band.

Kent’s making one, too. It’s super gorgeous and he’s even sharing his charts. He put a lot of thought into his and swatched like a MANIAC, so definitely check it out if you haven’t, already.

I’ll have some kits for the next update. The test knitters are plugging away and making absolutely lovely mittens. The pattern is pretty much good to go and that leaves the dyeing. I plan on making a couple of different colorways for each shop update, not to be repeated, so if you don’t dig any colorways in a certain update, all you have to do is wait a couple of weeks for fresh choices. Cool?

* Note to self: add slipper soles, since this post is what made you knit the slippers in the first place.

** I act put-upon, but it’s all an act. :) This is such great fun to knit and while knitting it, I ruminate about all the other cabled sweaters I want to knit, mainly Na Craga from Alice Starmore’s Aran Knitting, which I do believe needs to be the next Two Person Knit-Along with Jared. He agrees! Well, it was his idea, actually. 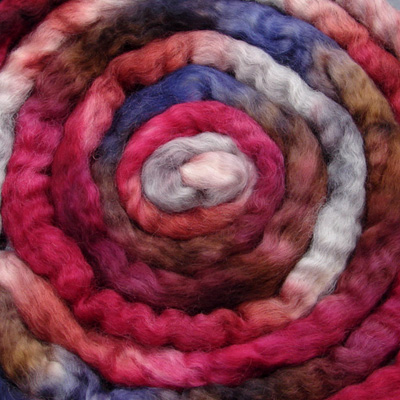 Shop here at 2 pm EST.
Look at it all on Flickr.

Renewal memberships for the Fiber Club will go up for sale on the 25th, and any slots left over will be for sale starting January 30th. I’ll remind everyone here again before the day. New, hopeful members, be forewarned that slots sell out within a matter of hours. Go here for more info. I haven’t made any changes to the club since last time. Same price, same amounts of fiber.

If anyone is interested in more Toxic, give me a shout (click the little envelope in the upper left hand corner of the page). I’ve got 7 bags left, $15 each. (This is for club members only, sorry!)